There’s nothing half-way about mid-August in St. Rémy. It’s the highest of high season, and the town pulls out all the stops. Tons of tourists come to town, and judging by the sturdy metal barriers positioned along the ring road, bulls are not far behind. In this cowboy-centric region of Provence, horses and bulls often take center stage. This weekend is no exception. From Friday night through Tuesday night, bulls blast around the municipal arena and also run freely in the streets—escorted on both sides by mounted horses—kids ride ponies on a parking-lot-turned-dude-ranch, flowered carts carrying beaming beauties in authentic traditional dress circle the historic center, rousing band tunes fill the air, and grilled meat dinners are on offer. Of course, rafraîchissemnts, refreshments, are available par tout. And, to culminate the vibrant summer festival, a concert featuring an impersonator of the French idol, Johnny Hallyday–it promises a spectacle that is “100% Johnny!” But first, some local musicians… 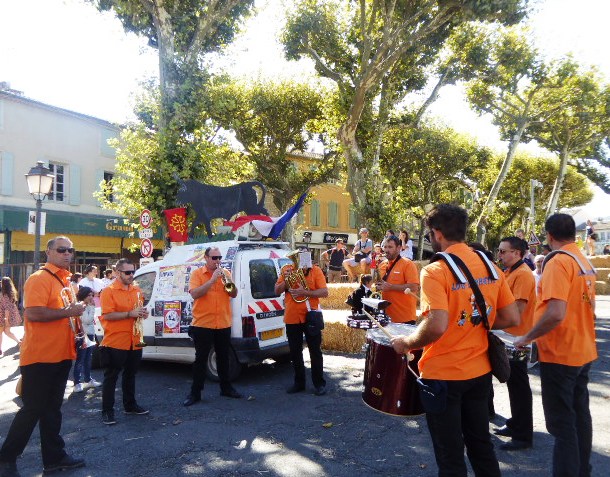 The toe-tappin’ band sets the festive tone. The crowds begin to congregate for the bull event. Some spectators have already snagged the best seats atop bales of hay.

Bulls? Where are the bulls? Someone said there would be bulls!

All ready to go. But where are those bulls?

Patience. A young rider epitomizes the calm before the storming of the streets.

Oh, there they are. Bulls buck in the truck. The mounted steeds position themselves to escort the pair of bulls through the streets. When the warning shot is fired, the guy on top of the truck, will release the doors.

And away they go! But not too far. Just half way around the ring road to another truck where they’ll be ushered up the ramp; after a short rest period, they’ll reverse course. A few round-trips later, they’ll be whisked back to the ranch–where, I’m sure, delicious feedbags await, an apt reward for the stars of one of St. Remy’s treasured traditional festivals.

One thought on “Ville en Fête”